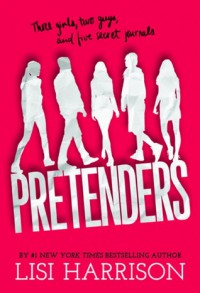 one didn't work for me at all. I hate writing less than favorable reviews. If I am not enjoying a book, I will usually not finish the book and don't spend any time writing a review for it. This was one of those books that kept me reading and things were heading towards a generous 3-star rating before I got to the last parts of this book.

This book is told through journal entries from a group of high school students. It took me a while to really remember what was going on in each of the kid's lives. The two male students were a little more distinctive but the three female students tended to blend a bit in my head. I did eventually get a better feel for each of the characters and it helped that their lives started to become more connected as the book progressed.

My biggest problem with this book is the ending. I should really say the lack of an ending. I have read books that end in cliffhangers and while it is not my favorite, I have learned to deal with it. This was worse than a normal cliffhanger. This felt like someone ripped a book in half and only gave you part of it. There was no resolution whatsoever when this book came to an abrupt stop. Instead of making me want to rush out and grab the next book in this series, I am completely turned off from this series.

I am not recommending this book to others. I liked the concept of following this group of students through their journal entries but considering the fact that there is no resolution when the book comes to an abrupt stop, I found it to be a very unsatisfying read.

I received a digital review copy of this book from the Little, Brown Books for Young Readers - Poppy via NetGalley.

Initial Thoughts
Why did I even read this? This was not good. I thought about giving up at one point but decided to push on. I should have stopped while I was ahead. It took me a while to really get a feel for each of the kids and I wouldn't say that I really liked any of them. I probably would have rated the book 3 stars if it wasn't for that ending. Or I should say the lack of an ending. The book just stopped without resolving anything. This was worse than a cliffhanger because we finally got just a little bit of action and then there was no more book. I won't bother reading the next book in the series.