Scent of Darkness by Christina Dodd 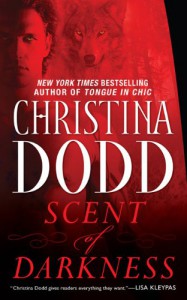 I enjoyed this book quite a bit. This was a re-read for me. I first read this book around the time of its original release, which was 2007, and didn't remember a whole lot about it besides the fact that the Hero is able to turn into a wolf and I liked it. As I read the book, there were some things that were somewhat familiar but in a lot of ways, it was like experiencing the story all over again for the first time. I am really glad that I decided to pick this one up again.

I love the set up for this series. The Wilder family is descended from a man that made a deal with the devil years ago. Since that deal was made, only male children have been born and each of those children is able to transform into a predator once they reach puberty. These are violent men who don't form attachments or marry but take what they want. Jasha's father broke tradition when he married his mother and hid his family from the larger family.

Jasha knows that his family is in danger from his mother's prophecy. Jasha is the oldest and is quite the businessman, owning a winery. He is the oldest of the four children in his family and he is able to turn into a wolf at will. Ann works for Jasha as his assistant but has wanted him for a very long time. She doesn't realize that when she goes to see him at his home that she is going to get more than she bargained for.

I found this book to be really exciting. I think that the fact that these characters are faced with a situation that is bigger than they are is really interesting. Their goal is really just to keep their family safe and despite the fact that their abilities come from a deal with the devil, they do want to do the right thing. I liked that the enemy could pop up anywhere and really that anything could happen.

I did like Jasha and Ann and thought that they did make a good pair. They did have a lot of chemistry and liked each other before the book actually began. I thought that Ann's history was really interesting and I liked the fact that she was able to accept everything going on as quickly as she did. Jasha really did care for Ann although he sometimes did need to learn to include her in the decisions that were being made.

I would recommend this book to fans of paranormal romance. I found this to be a fast-paced story with a rather unique premise. I am looking forward to continuing my re-read of the series very soon!

Initial Thoughts
This was a re-read for me. I think that I originally read this book sometime around its release in 2007. I didn't remember a whole lot about the story besides the fact that the Hero could turn into a wolf. I also remember really enjoying the book. I still enjoyed it but I think that I probably had more problems this time around. It was a quick read and I definitely plan to re-read the rest of the series.