The Familiar Dark by Amy Engel 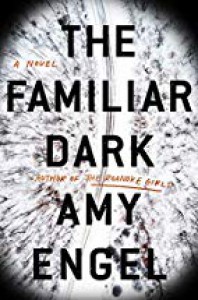 This was a fantastic novel! I read this author's previous book, The Roanoke Girls, and fell in love with this author's writing so I knew I wanted to read this book just as soon as I saw it. I went into the book with rather high expectations and they were met. This was a book that I found very hard to put down. The story was surprising at times and emotional in others. I thoroughly enjoyed the time I spent reading this story.

The book opens with Eve receiving a visit from her brother Cal while working her shift at the local diner. Cal is a local police officer and is there to tell Eve that her 12-year-old daughter, Junie has been murdered along with another child. My heart broke right with Eve's. The descriptions of how she got through those first few days really got to me. Eve worked hard to be a good mother to Junie and only had her brother Cal to lean on. After Junie's death, Eve has nothing left to lose and decides she will stop at nothing to get justice for her daughter.

I thought that the characters in this story were very well done. There is a pretty eclectic group of characters represented in this story and they all felt very real to me. I found that while I was pretty shocked by some of the turns the story took, the actions of the characters always felt authentic. I really felt like I was in Eve's head and I understood her motivation to learn what happened to her daughter.

I love the fact that this book was able to surprise me. And it didn't just surprise me once because there were several times where the story took a turn that I didn't expect. I love that this story made me feel. There were times that this story really got to me. Eve was such a strong character who was put in one of the most difficult situations that I can imagine. I honestly don't know how someone could read this book and not feel for Eve. I also love that the mystery in this story really kept me guessing. I had no idea who killed those two girls but I was just as desperate as Eve to find out. I found the mystery to be complex and very well done.

I would highly recommend this book to others. I found this to be a wonderfully told story that was heartbreaking at times. I cannot wait to read more from this very talented author!

I received a digital review copy of this book from Penguin Publishing Group - Dutton via Edelweiss.

Initial Thoughts
This falls somewhere between 4 and 5 stars for me. I am going with 4 for now but might bump it up after I have some time to think about it. I had a really hard time putting this book down. I couldn't imagine going through what Eve does in this story and reading about it made me uncomfortable at times. There were a few twists that I found to be rather shocking. This is one of those books that will stay with me for a while.