At Grave's End by Jeaniene Frost 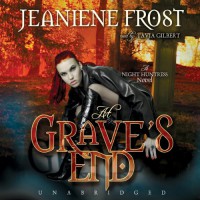 I had a great time with this book during this re-read! I fell in love with this series quite a few years ago and decided to get the audiobooks since I knew that I would want to revisit this world. This is the third book in the Night Huntress series, which really does need to be read in order. There were parts of the book that I did remember but I had lost quite a few details over the years. I am very slowly working my way through the series for the second time and found it to be just as enjoyable as it was the first time around if not more.

I love Cat and Bones. More accurately, I like Cat but I LOVE Bones. There are actually a lot of great characters in this series but Bones is my favorite by far. Bones can do just about anything and doesn't make apologies. His love for Cat is sincere and unquestionable. I do like the two of them together. I must admit that there were a few times in this book that Cat got on my nerves just a bit. I like Cat and I understand that she has some great ideas but it just seemed odd that all of these really old vampires were taking her lead. I wanted to be quiet for a minute and maybe learn something from the very capable people she had around her. I also thought that Cat took some unnecessary risks and put herself in some uncomfortable positions which illustrated the fact she still has a lot to learn. I did think that Cat really showed her strength when everything went horribly wrong and she was forced to take a leadership position.

The secondary characters played really important roles in this book. I believe that this is Vlad's introduction in the series and I was quickly reminded why I love his character. The background that we learn about his character in this book was very touching. Mencheres was in the spotlight for a lot of this book and I have always enjoyed his character. I liked the developments in vampire politics that revolved around him and found his backstory to be rather eye-opening.

This was an exciting story. There were a few scenes that stayed with me over the years which really says a lot about the book. There were some rather emotional moments in the story which I thought were handled very well. I liked that there was such a wide range of emotions in a single story and it all worked so well.

Tavia Gilbert did a fantastic job with the narration of this book. This story has a pretty large cast of characters and she handles all of their different voices very well. I am actually rather amazed by the wide range of accents and voices that she does use in this audiobook. I thought that she expressed all of the emotion and excitement of this story expertly. I would say that her narration added to my overall enjoyment of the story.

I would recommend this series to others. This is an exciting installment in a series filled with wonderful characters and intense situations. I can't wait to continue with my re-read of the series!

Initial Thoughts
I had a great time with this. This was a re-read for me but it has been several years since I last read this book. I really didn't expect to remember much of anything but I did remember some parts of the story. Maybe my memory isn't as bad as I think it is. Bones is my favorite character in this series by far but Vlad is right up there so I was thrilled to see him play a role in this installment. Ian, Spade, and Mencheres are also around which made me a happy camper. Cat did get on my nerves a time or two but I do like her character and thought that she was rather strong in this book. There is quite a bit of action and some pretty intense scenes that kept the excitement going.