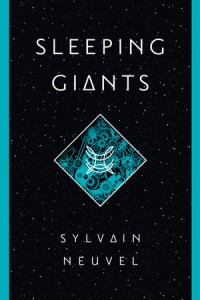 This was really good! Amazingly good! I am kind of thinking that I am a big dummy for not realizing how good it was when I read the book last year. I liked it the first time around but I wasn't nearly as impressed as I was with this listen. I really do think that the narration of this story took everything to a whole new level. I listened to it over just a few days and really never wanted to stop listening. I am so glad that I decided to give this book another try.

This story is quite imaginative. Rose falls into a hole as a small child and discovers what appears to be the hand of a giant metal robot. I was hooked right away. The entire premise is just so interesting and I loved watching this group try to figure everything out. Since I had read this book just a year ago, I already knew how things would play out but that didn't lessen the excitement for me.

This book is laid out a little differently than the norm. Instead of a running narrative, this story relies on a series of interviews, reports, and journal entries. The interviews are conducted by a character that doesn't have a hands on role with the project but seems to have a lot of power over everything that is going on. I found myself not only trying to figure out what was going on with the project but also trying to get some kind of clue regarding the identity of the nameless character.

One of the main reasons that I decided to give this story another try was the fact that this audiobook is performed by a full cast. Having read the book before, I had a feeling that if done right this audiobook could be amazing. I was right. I almost felt like I was listening to a play being performed. Each character in the book had a different narrator. Interviews would be conducted back and forth between two narrators. The narrators were all really good and captured the characters very well.

I would highly recommend this book to others. If you are someone who enjoys audiobooks, I would recommend that format if you have the option. The full cast production of this audiobook really does take a good story to a whole new level. I can't wait to continue with this series.

Initial Thoughts
I read an arc of this book last year and liked but didn't love it. I actually only gave it 3 stars last year. I had heard that the audiobook was really good so I decided to give it a try and I am amazed. The full cast performance of this story was fantastic. How did I not love this book the first time around? I probably should have liked it a bit more when I read it the first time but I do think that the audio takes it to a whole new level.