Making You Mine by Melissa Foster 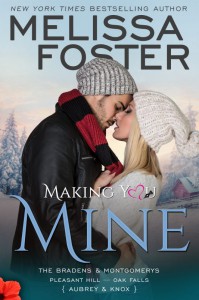 This really was the perfect book to pick up during a rather stressful week. I found this to be a really enjoyable and uncomplicated romance. I have read a few titles published under Melissa Foster's pen name that she uses for her sweeter titles, Addison Cole, but this is the first I have read with Melissa Foster listed as the author. This book is part of a series but I read it as a stand-alone and thought it worked perfectly fine on its own. I definitely had a good time with this delightful romance.

Knox and Aubrey aren't strangers to each other. They have been hooking up with each other after different events for quite a while. They both want to keep it no-strings-attached until Knox decides that he wants more. I loved watching Knox convince Aubrey to give him a chance. They really make a fantastic couple and had a lot of wonderful chemistry. There weren't a lot of obstacles to their relationship and I thought it was fun to watch them fall for each other.

Andi Arndt and Jason Clarke both did a fantastic job with the narration. I thought that they both handled all of the character voices very well and brought a lot of emotion to the story. Andi Arndt has been a favorite narrator of mine for a long time and I could see myself adding Jason Clarke's name to that list. They both read at a very nice pace and I feel like their performance added to my enjoyment of the story.

I would recommend this book to others. I found this to be a very enjoyable romance filled with wonderful characters. I wouldn't hesitate to read more of Melissa Foster's work in the future.

I received a copy of this audiobook from the author/publicist via Audiobook Boom.

Initial Thoughts
An uncomplicated romance was the perfect thing to pick up during a week like this one. I liked Knox and Aubrey and thought that they had a lot of great chemistry. They really didn't have too many obstacles to their relationship to deal with in my opinion. Their big "fight" almost made me laugh because after 20 years of marriage it didn't seem like a big deal to me at all. I found it to be an easy and enjoyable listen with both of the narrators doing a fantastic job with the story.